Welcome to Metalzin.com. Metalzin.com is a website honouring Metalzin Webzine, a web-based zine that existed between 1996 and 1999. It was the world’s first webzine in Spanish language about the Black metal (and similar) genre.

It was founded by Andreas M., under the monicker of “Metallykon”. 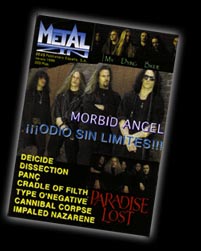 The first issue in fact started as a school project of Metallykon, and as such had a print (much aftersought) version (cover on the left), but it was immediately turned in its entirety into an online publication – and all the following issues were all online from the start off. Over the full-featured 4 issues the webzine published about 100 reviews and 30 interviews, some of them with leading bands such as Moonspell, Ancient Rites, Nightfall or Sundown.

The fifth issue never saw the light of day. The last work was a review of Mortician’s “Chainsaw Dismemberment”, on August 8th, 1999. By then, Metallykon had become a contributor of the cult Spanish magazine Metali-K.O. and from summer 1999 onwards he discontinued his webzine.

As all good things in life, Webzine Metalzin lasted shortly. This website honours this historical publication, now of cult, which in 1996 emerged as was the world’s first blackmetal-only webzine in Spanish language.

Now you can browse the contents of the 4 issues, by clicking on the menu on the top, and you can also read Metallykon’s contributions to the Spanish magazine Metali-K.O.

Metalzin.com is a website honouring Metalzin webzine, a web-based zine that existed between 1996 and 1999. Metalzin was noteworthy because it was the world’s first webzine in Spanish language about Black metal and similar genres. As such, it was a historical publication. Now all the contents of the old webzine have been copied to this, new website.